“So, you’re the temp, right” she asked me in a hushed voice in the hallway outside her office, “From the fourth floor?”

Hesitantly, after a glance at my practical shoes once reserved for internship interviews, and at my knee-length herringbone skirt still holding onto its new-clothes smell and neat lines, with its inseam still boasting the plastic loop from its price tag, I nodded a shy, slightly exasperated, yes.  Yes, I Am The Temp.  But the way she had whispered the word, the way she hid her mouth behind her hand as she said it, smiling a sly, insider type of smile, made me feel dirty. Like somehow, I had admitted to being from a lower caste. Like I was an untouchable. Separate. Different. Dangerous? Her tone suggested that instead of the borrowed corner office I had inhabited for the past few weeks, she had instead found me guarding some seedy street corner.

The Scorn. The Shame. The Temporary Assistant: Prostitute of the Modern Business World?

I had anticipated before moving to California as a new graduate, ripe with the scent of naïveté and job inexperience, that finding employment would be hard, especially with the ever-doubtful economic climate. Having graduated a few years behind friends who had not opted to study nursing or engineering, and instead had graduated from liberal arts colleges and universities like myself, prepared me well enough in advance to lower my expectations for easily gained employment.

So, finding myself newly relocated, unemployed, inexperienced, and repelled by the idea of the waiting tables and working in the food industry ever again (barring of course, pain of death or threat of eviction)  I did what my mother and aunts and many others have done before me when immediate employment action must be taken: I applied to a temp agency. Well, actually, I applied to more like four or five temp agencies.

However, I quickly found that even finding a temporary position with an agency was not as easy as I initially thought it would be.  With my West Coast itinerary up in the air, I decided that a temporary position would be the safest and surest bet for a quick source of income. Unfortunately I learned, after countless phone calls and online applications, that many of the agencies now served as direct hire services and were no longer making as many temporary placements.

But temp agencies have been around since the mid-forties. William Russell Kelly began Kelly Office Services, one of the first employment agencies, in 1946.  His services popularized the term “Kelly girl,” as many of company’s clients were women, placed in clerical or secretarial positions, and the phrase soon became synonymous with the temporary assistant. I know what you’re thinking, exactly what any woman trying to enter the workforce wants to be thought of. Currently, there are countless employment agencies to choose from that place individuals of all genders in many types of positions with varying levels of skills and permanence. And from my brief experience thus far, assistants are now just called “temps,” so it’s good to know there has been some slow and steady improvement on the sexism front of the industry. 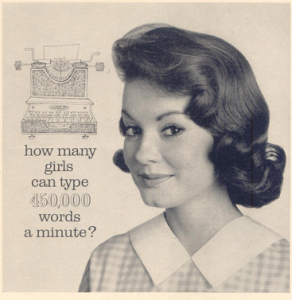 At my first temp agency appointment I sat in the waiting room, a good copy of my resume in hand, in between a girl wearing purple spandex tucked into a pair of well-worn Uggs, and another girl wearing patterned pajama bottoms.  My first thought was wow, I’m so glad I was overly concerned if these dress pants were conservative enough, and my second, more sobering thought was, with the competition being less fierce than expected it shouldn’t be too hard for them to place me in something. Like, anything.

However, when the placement advisor called my name, she took my resume with her glittering, neon-pink clawed hands and briefly glanced at the single page; a surprisingly simple looking document I had painstakingly typed, retyped, arranged, and rearranged countless times to fit best in the 8×11 space.

“So you have no administrative experience,” she said. I watched the girl in the pajamas walk by me, scratching at her grizzled ponytail as she sat down with another placement advisor to discuss her new assignment.  Pajama girl got a job, I thought, what the hell?

“Well that’s not exactly true,” I responded quickly, “I worked for a private mailing company in college and had some administrative responsibilities there.”  Actually, I worked in the student mailroom in college, which was owned by a private company, but a student mailroom nonetheless.  My administrative responsibilities were confined to sorting student mail from faculty mail, retrieving packages, and browbeating kids who were too lazy to remember their mailbox combinations. Semantics.

“Okay,” she said, contemplating my resume a little more, “We just want to make sure we’re the right fit for your needs.” Which is really a canned business-approved way of saying just the opposite. She looked up sharply. “Can you type?” she asked.

Can I type?! I wanted to say. Really. Can you read? I just spent four plus years in college. It’s all I got going for me. At the very top of my resume is typed: English Major, Creative Writing Concentration. Which basically means I earned by degree by typing and staring at a computer screen until my eyeballs bled. 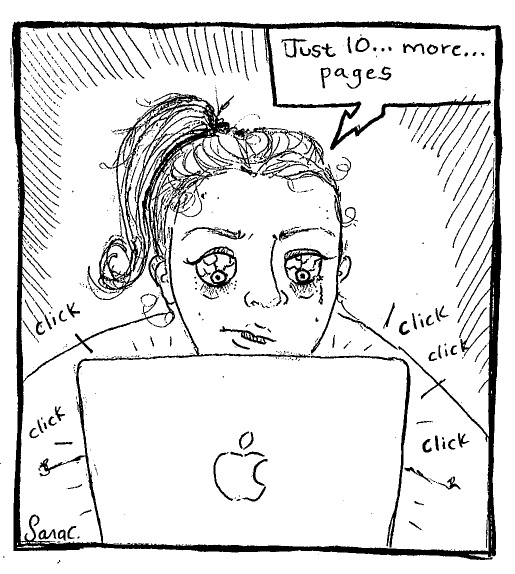 “Yes, I can type well” I said instead. What I wanted to tell her was that I earned my degree by pain of astigmatism and Carpal tunnel.

First post-graduate lesson learned: your college degree is not a free pass. Not even for seemingly easy tasks.

(Later lessons involve avoiding poisoning by using the right instant coffee packets for the office espresso machine). Your college degree doesn’t mean you can actually do anything. Which includes, but is not restricted to, answering phones, typing, or filing alphabetically.

“Well, we’re going to set you up on this computer over here,” the intake advisor said pointing with the glittering, violently pink claws. She teetered slightly on her stilettos as she moved quickly past me towards a cubicle with a large, outdated monitor. “We’ll have to have you take a few tests to see where you stand,” she said as she indicated a laminated paper taped next to the computer screen with the picture of a filing cabinet. The drawers on the diagram were lettered and numbered in large print, and I spent the next twenty minutes answering questions like the following:

“If you have a document regarding the individual ‘Parson, James,’ in which drawer should it be filed:

Please use the diagram provided.”

Oh. My. God. I wanted to smash my face into the keyboard.  Thankfully I passed all my tests, which covered topics ranging from correct wrist posture on the keyboard and not taking sexual or monetary bribes, to proper heel height for the office, at which I discreetly stole another glance at my intake advisor’s sky-high arches.

Though I was initially told that there were few, if any, temporary positions available, two days later I had an interview and was told I would be employed for the following six weeks as a Human Resource Assistant for a large oil and gas company. That next Monday I embarked on the first of my adventures as a temporary assistant. But more specifically, on my adventures as: 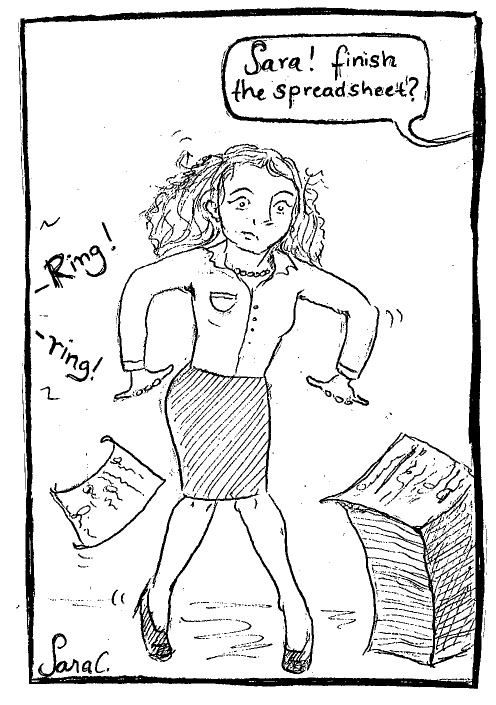 Look out for later installments of “Adventures of The Fourth Floor Temp: A Post-Graduate Employment Saga,” coming soon..